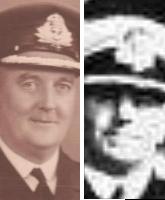 
There were three Captains of HMS Jervis Bay during WW2, from its commencement in 1939, until the ship's demise of 5th November, 1940. The story of Captain Fogarty Fegen is covered elsewhere on this site. This page is devoted to the two Captains who preceeded him.

Arthur Gerald Harris was a Yorkshireman, born in Bradford, West Yorkshire on 21st March, 1886. He was baptized in the Manningham district of Bradford. On the baptism certificate, his parents are listed as George Harris (a banker), and his wife Dora Harris. We know that he had at least one sibling, a younger sister called Theodora Sylvia Hope Harris, born on 14th November, 1895.

In 1930, Arthur Harris took over as Commander of a cruiser, HMS Carysfort.

Arthur Gerald Harris joined HMS Jervis Bay as Captain at the beginning of WW2 in 1939. He remained in charge, until being taken ill at Freetown, Sierra Leonne in February 1940. It is believed that his illness at the time was stomach or intestines related, such as stomach ulcers. Arthur Harris went over the side of the ship on a stretcher, never to return to HMS Jervis Bay again. Commander Blackburn would take over as temporary captain of the ship in his absence.


Arthur Harris married Thora Mulcahy on 31st December, 1936, in Plymouth, Devon, where Arthur was stationed at HMS Devonport, the naval shore base at Plymouth. The marriage produced a son (Michael John Harris), who was born on 1st December, 1942, two years after Captain Harris had left HMS Jervis Bay. From 1941 to 1942, Arthur Harris is listed as Chief Staff Officer to Flag-Officer-In-Charge, at the naval shore base of HMS Badger at Harwich.


Mordaunt describes Captain Harris as a nice man, brought back from retirement for the war effort, who lived in Bideford, North Devon. He regarded Captain Harris as an 'easy' man to work for, until he was sadly taken ill at Freetown in early 1940, and had to leave the ship.


Captain Arthur Gerald Harris died on 18th July, 1947 (aged only 61 years of age.) His son Michael was still only a youngster at four years of age. Arthur's wife Thora passed away on 1st January, 1986. Arthur Harris is buried in the cemetery/churchyard of St John The Baptist Church, Instow, near Bideford, North Devon. Thora's ashes are laid in the crematorium gardens at Barnstaple, North Devon.


I am indebted to Arthur's son Michael, who has given me the valuable information to write this short story about Captain Harris. Michael John Harris (Lt. Col. R/E) went on to marry Karin Brigitte on 16th October, 1970 in Harrogate, North Yorkshire, in the same county where his father had been born back in 1886. Michael and Karin's marriage produced three children - (Samantha Jane Harris - born 8th April, 1972 & who married Christopher Beer on 28th August, 2011); (Edward Michael Gerald Harris - born 5th January, 1975); (Charlotte Mary House - born 26th November, 1982.) So, the 'Harris' name lives on, both in name, and in memory too. 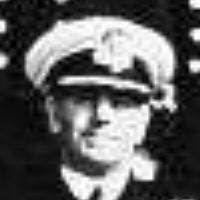 Commander James Alexander Pollard Blackburn was the 'Executive Officer' on board HMS Jervis Bay, and so second in command to the Captain of the ship, Arthur Gerald Harris. Born in Murree, West Bengal, India on 12th August, 1889, Commander Blackburn took over command of HMS Jervis Bay in February 1940, after Captain Harris was removed from the ship due to illness.

James A.P. Blackburn had won a gallantry award himself in his early naval days as a Sub-Lieutenant on submarines in 1915, though this was not fully recognized until later on in WW1 (in 1917).

As an Acting- Lieutenant, he was awarded the DSC in 1917, again for his WW1 exploits. Originally listed as RNR (Royal Naval Reserve), James Blackburn was transferred to the RN (Royal Navy) in 1918 (5/6/18), for 'gallantry in action'. This was something that rarely occurred, and goes to show how fine a naval officer James A.P. Blackburn had become.

Blackburn's early naval career continued to blossom, and from 1918 to 1919, he was based at HMS Dolphin (Gosport, Hampshire), for command of submarines.

Submarines still remained based at Gosport (until 1999 - now the submarine museum), and in Rosyth (Scotland), their main base nowadays. A battleship (HMS Benbow) saw James Blackburn as a Lieutenant Commander from 1923 to 1925. 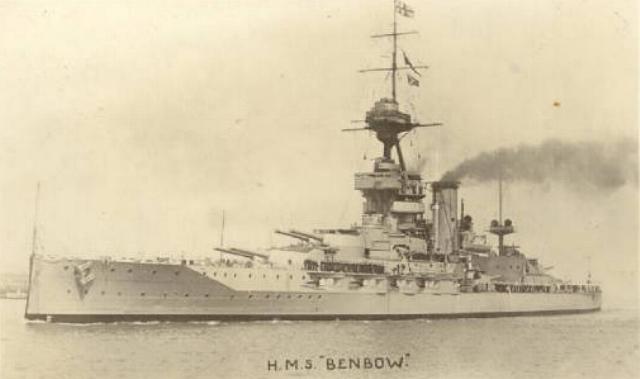 James Alexander Pollard Blackburn retired from the RN in 1933 , as a 'Commander' (Executive Officer.) No further appointments were listed until Blackburn returned as 'Executive Officer' aboard HMS Jervis Bay on 27/11/1939, leaving the ship in September 1940 to become Commanding Officer (Captain) of another AMC (HMS Voltaire). Blackburn wore an RNR uniform aboard HMS Jervis Bay, though he is actually listed as RN Officer (Retired.)

The Voltaire took part in an epic battle of her own against the German auxiliary cruiser Thor. HMS Voltaire finally succumbed to the Thor, losing 90 men (casualties) in the process. Commander Blackburn spent the rest of WW2 as a prisoner of war, along with the other HMS Voltaire survivors. it was this battle that finally convinced the British Admiralty that Armed Merchant Cruisers were not fit to provide the function required, and the remaining ships (AMC's) were converted to troopships instead. 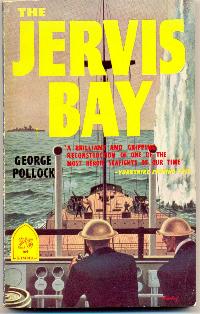 Books by Pollock and Duskin/Segman relating to the story of HMS Jervis Bay, describe Cmdr Blackburn upon joining the ship in 1939, as another volunteer out of retirement, the fifty-year old Blackburn was a slim, straight-backed, vigorous leader who had served on a battleship and on cruisers and as commander of a training ship. In World War One, he has won the Distinguished Service Cross (DSC) for his role aboard a Royal Navy submarine that sank a U-boat. He had also led a morale program for petty officers. "Just the exec the Jervis Bay needed."

The books go on to detail how Blackburn focussed on raising/keeping staff morale high, setting up a cinema on the ship, learning the names of each individual crewman to 'put a face to the name' etc. Blackburn went on to organize the ship's first concert to boost morale, and he worked them hard at gunnery practise. In return, the men respected officer Blackburn, who they saw as a "superb seaman and Grade -A officer". 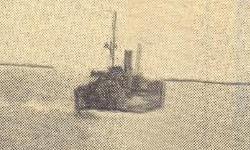 It was Commander Blackburn in his Acting Captain role, who had led the ship's crew in towing the ship 'Hartismere' from the South Atlantic back to Freetown Sierra Leonne in February 1940, the longest tow taken place during WW2.


Commander Blackburn had been sworn in as Acting-Captain to replace Captain Harris, by Vice-Admiral G.H. O'Lyon, Commander-In-Chief, Freetown in February 1940. It was the handing over of the ship in April 1940 to the younger Captain Fogarty Fegen (48 years old at the time), that led ultimately to Commander Blackburn leaving the ship that he loved (HMS Jervis Bay). It is well known that he was disappointed to be relegated back to second in command to the younger Fegen, who was equally dismayed when he lost the excellent officer Blackburn to HMS Voltaire in September 1940. 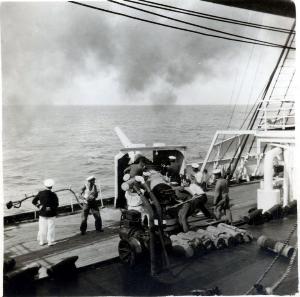 Ultimately, fate had played a hand of course, and Blackburn would survive WW2, whilst the majority of the crew of HMS Jervis Bay would pay the ultimate price, something that he never really got over in his mind, so I am led to believe. "They're a damn good crowd of lads. I'm very fond of them, very proud of them", Blackburn once remarked to Captain Fegen. His feelings about the ship were indeed deeply personal. "I loved the Jervis Bay as I loved no other ship in my long service" he later commented. "I sweated out my soul to turn her into an efficient fighting unit".

Indeed at the end of 1940 whilst returning from escorting Convoy HX86, Captain Blackburn took HMS Voltaire to the site of the sinking of HMS Jervis Bay on his way back to Halifax, Nova Scotia. He brought the Voltaire to a dead slow and he ordered a rifle volley salute to his former ship and shipmates resting on the bottom of the sea, 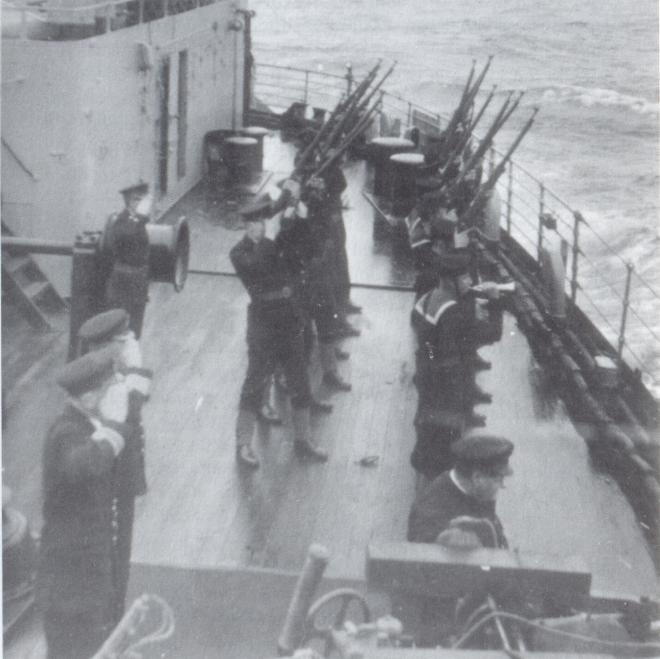 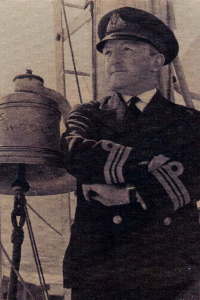 Ironically, in October 1940, Commander Blackburn would be replaced on HMS Jervis Bay by another outstanding Executive Officer in George E.C. Wood. Wood was to take charge as Captain of an American battleship donated to the UK by the USA upon returning to England. Wood, who had been top year student at Dartmouth Naval College earlier in his naval career - even finishing in front of Lord Louis Mountbatten, who was in his year group - was fully expected to be a top captain like Blackburn. Sadly, Britain and the family of George Wood were to lose a top quality officer/family member, when Jervis Bay encountered Admiral Scheer.

Angel went on to marry a man called Dennis Dugdale (OBE) in Westminster, London in 1945. They had a daughter (Janet H. Dugdale) - born Thanet in 1946.

In 1931, Valentine (aged 18 years) travelled to China with a 38 year old lady from the same address (Marion Munro-Faure) that she lived at, at the time in London. 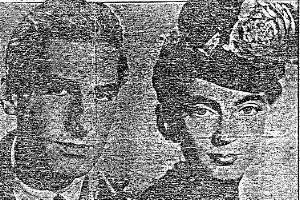 Pandora appears to have been adopted by James and Maria Robertson, though the reason is unknown at this time. Pandora subsequently married as Pandora Marion Hope Robertson to Sam Pearson.

Pandora appears to have been adopted by James and Maria Robertson, though the reason is unknown at this time. Pandora subsequently married as Pandora Marion Hope Robertson to Sam Pearson.

James & Ruby Blackburn must have separated and divorced around 1920, as both married other people in 1921 & 1922 respectively.

James A.P. Blackburn married Hilda Kate Stanford in Wangford in 1921. Pollock's book stated that Blackburn had four children when he joined HMS Jervis Bay in 1939. It is difficult to say if it was the three girls and one boy (from marriage number two) or two girls (less the adopted girl) and two boys (from marriage two.) Anyway, the boys names were John Blackburn (nee Stanford) - born Portsmouth in 1922. ***This is a definite child of Cmdr Blackburn. The second boy was David H. Blackburn (nee Stanford) - born Alverstoke/Gosport in 1932. This one is not confirmed as being correct at present, though we think that it is correct.